SJR Opinion Research surveyed 800 California Adults during July 9 through July 15 of 2020.  The respondents were reflective of California’s ethnicity, partisanship, age, and gender. A sample size of 800 yields a sampling error of +/- 3.5%.  The survey measured 13 indicators of compliance with various mandates and recommendations designed to retard the spread of COVID-19.  Each indicator, asked as a question, was scaled as Almost Never, Seldom, Sometimes, Often, and Almost Always.

The prevailing model of fighting COVID-19 is for governments at all levels to study the science and hammer out recommendations and mandates, expecting the public to uniformly comply with the directives as issued.  COVID-19 has been thoroughly researched, but few measurements have been made from the perspective of the nail rather than the hammer.  This project sought to study compliance mandates and recommendations from the public’s perspective.

Survey results were subjected to a statistical procedure known as factor analysis.  Based upon statistical correlations among the indicators, factor analysis reduced down the 13 indicators to a smaller set of variables that reflect the way the public conceptualizes the problem.  Three concepts are identified.  We label the three concepts as: (1) Defensive Behaviors, (2) Mobility, and (3) Government Credibility. 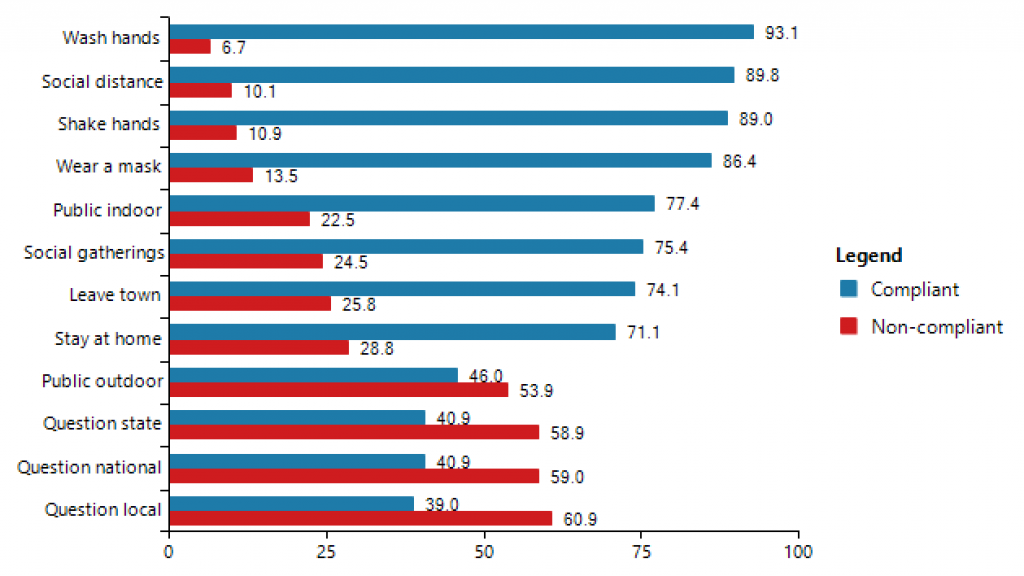 The results, as displayed in the above table, demonstrate that compliance in California for the defensive behaviors is commonplace.  Roughly 90% of the adult population claim to adhere to practice defensive behaviors.  They “usually” or “almost always” adhere to these mandates and recommendations.

Compliance drops to about 75% for the mobility indicators.  Roughly one out of four respondents said they “almost never,” “seldom,” or only “sometimes” comply with desired mobility behaviors.  The exception was the behavior of visit public outdoor spaces (e.g., parks, trails, beaches).  This indicator was upside down, achieving only as 46% compliance.  All three items forming the last concept, credibility of government, were upside down with more respondents saying government lacks credibility.

There are two major takeaways from this study.  The first is that compliance is not unidimensional.  People don’t just choose to comply or choose not to comply with government directives.  The public tends to engage in compliance behaviors (wearing a mask, social distancing, practicing good hygiene) and to a lesser degree mobility behaviors.

The second implication of the study is that compliance is fragile.  There are already cracks in the dam with respect to outdoor public gatherings.  And clearly the public views government edicts with a critical eye.  The skepticism may be a result of what they view as inconsistent recommendations or directives.  The survey found, for example, that the public is divided on the issue of returning students to the classroom.  One-third of the respondents want students to return to school while nearly half of the sample resist the idea. Amongst parents though, nearly half favor going back to in-classroom education while thirty-eight percent oppose the idea.

Based upon statistical correlations among the indicators, factor analysis reduced down the 13 indicators to a smaller set of variables that reflect the way the public conceptualizes the problem.  The table below shows the results of the correlations between the indicators and each of the 3 factors. Indicators such as attending social gatherings and visiting public outdoor places had the highest correlation to the Mobility factor (column 1). The indicators related to questioning government directives were strongly correlated with the Government Credibility factor (column 2). Lastly, the preventive measures people are taking were correlated to the Defensive Behavior factor (column 3). Reliability tests with the Cronbach’s alpha statistic further confirmed that these factors were unusually strong in their explanatory power and independent of each other, given the relatively small number of indicators in the survey. 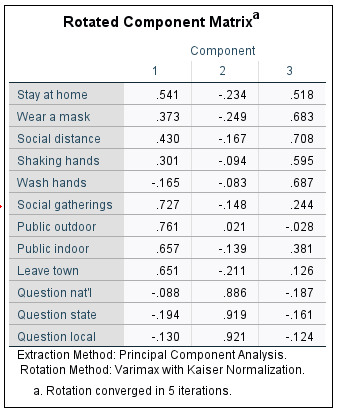